The importance of rapport with your therapist 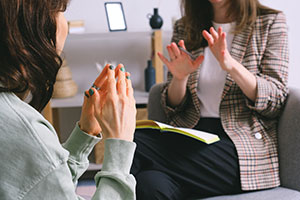 Written by Trevor Eddolls
Rapport is defined as a relationship of mutual understanding, or trust and agreement between people.

Rapport building is achieving mutual trust and understanding between two or more people that leads to deep listening, meaningful conversations, and fulfilling relationships where everyone involved benefits.

Wikipedia tells us that there are a number of techniques that are supposed to be beneficial in building rapport such as: matching your body language (eg posture, gesture, etc); indicating attentiveness through maintaining eye contact; and matching tempo, terminology, and breathing rhythm.

In conversation, some verbal behaviours associated with increased rapport are the use of positivity (positive ‘face management’), sharing personal information of gradually increasing intimacy (self-disclosure), and by referring to shared interests or experiences.

But is rapport that important? Isn’t it just a nice-to-have part of therapy? The answer is a definite NO! Would you believe that the rapport you have with your therapist is more important than the type of treatment they actually give you! Let me explain…

Assay and Lambert, back in 1999, looked at the common factors that are found in psychotherapy and counselling. They found four, and the factors were: techniques and model factors; expectancy and placebo effects; client variables and extra-therapeutic events; and the therapeutic relationship – ie rapport.

Assay and Lambert went on to give a numerical value to each factor. They suggested that 40 percent of the change made by a person was due to the support network they had outside of therapy and their attitude to therapy. That’s the client variables and extra-therapeutic events. The next big category was the relationship between you and the therapist. That accounted for 30 percent of the improvement you’ll make. Let’s just say that again: 30 percent of the change made by you is down to rapport. Going back to their figures, there was a 15 percent improvement due to the placebo effect and your own expectations of success. And lastly – yes, I did say lastly – was the therapy techniques used by the therapist, eg solution-focused hypnotherapy or any therapy!

This shows the importance of building a relationship with your therapist and developing that therapeutic alliance or rapport. Summers and Barber (2003) wrote in their article “Therapeutic Alliance as a Measurable Skill” that: “out of the Babel of psychotherapy models, concepts, and techniques, the therapeutic alliance stands out as a measurable phenomenon that has been shown to have a robust effect on treatment outcome”.

Picking up on the importance of body language to rapport, it’s worth remembering the work of Albert Mehrabian on verbal and on-verbal communication. He suggested:

NLP recognized the importance of rapport building and so investigated ways that seemed to work and then codified them into techniques that would work for anyone.

According to NLP, there are three elements to rapport: mutual attention (where each person is tuning in to the other); shared positive feeling (mostly conveyed by non-verbal messages); and synchrony (people unconsciously respond to each other’s movements and gestures).

Commonality is the technique of deliberately finding something in common with a person in order to build a sense of camaraderie and trust. This is done through shared interests, dislikes, and situations.

Mirroring and matching is another way of rapport building. Mirroring is the simultaneous ‘copying’ of the behaviour of another person, as if reflecting their movements back to them in a mirror. Matching can have a built-in ‘time lag’. So, for example, if a seated therapist uncrosses their legs and leans slightly inward while speaking, you can wait for a few seconds and then discreetly adopt the same posture.

Cross-over matching is when you use more subtle techniques – eg they tap their hand and you tap your foot.

Things to mirror and match include:

Warning: directly matching gestures can be counter-productive because people can spot it very easily.

Emotional mirroring can also be used to create rapport. You empathize with someone’s emotional state by being on ‘their side’. It’s important to listen for key words and problems that arise, so you can talk about these issues and question them to better your understanding of what they are saying and show your empathy towards them (E Arnold and Josh Boggs, 2007).

In the 1990s, Tony Alessandra and Michael O’Connor wrote a book called “The Platinum Rule”, arguing that you should, “Do unto others as they’d like done unto them”. They suggested that people can be on a continuum from Open to Closed. Open people show thoughts and feelings readily/willing, their body language is easy to read, they love chit chat, and are tactile. They prioritize people over tasks. Closed people are pretty much the opposite. They make decisions based on facts and figures.

Their second continuum is whether people are fast or slow. Fast people walk, talk, eat, and make decisions quickly (sometimes). They know what they want and assert themselves easily. They are impulsive. They are confident risk takers and don’t mind being wrong. Slow people are the opposite.

It’s suggested that when we come across someone who is different to us, whether they are more open or more closed or more fast or more slow in their behaviour, we tend to react with the subconscious desire for them to be more like us. And this often manifest in us unconsciously and energetically pulling on a metaphorical rope, behaving even more in the opposing way. We’re behaving like: ‘Be more like me’. Be more open like me! And, so, we become even more open than we ordinarily would be. Or be more slow, like me! And so, we become even more slow than we might ordinarily be.

Therefore, you may need to change your style to build and maintain rapport with your therapist.

If the therapist is an Achiever, be directive. If they’re an influencer, be persuasive. For includers, be inclusive. And for analysers be demonstrative.

Emily and Laurence Alison have a great book about rapport called, “Rapport: The Four Ways to Read People”. They explain that their techniques work on terrorists, criminal suspects, teenagers, and two-year olds. And, they say, the techniques work equally well when used by their teenager on them!

They say that rapport can be learned, and the more you use it, the better you get at it.

For them, the cornerstone of rapport is HEAR:

Everyone likes to be in charge of their own destiny, so giving people choices always works well. Reflection is what some people call active listening. Rather than just repeating back what the therapist last said, select from it what you want to know more about. It’s a conversation where your focus is on what they have said rather than on what you want to say next.

The book describes the SONAR mnemonic for reflective listening. SONAR stands for:

Interestingly, the book says that people are the best experts on themselves. And they say that suggesting a solution to a person isn’t the best way forward, that person needs to come up with a solution and internalize it.

The book identifies four roles that people can play in an interaction, which they call T Rex, Lion, Monkey, and Mouse, and how to use different roles effectively to achieve your goals. People may be good or bad at using the role. For example:

If you find you are being a good T Rex, they suggest that you are clear about what you want and you say it clearly. They have a mnemonic, which is CALM:

The mnemonic to remember when being good Mouse is EASE, which stands for:

The mnemonic for the Lion’s mindset is ROAR, which stands for

The acronym for the Monkey’s mindset is TEAM, which stands for:

The book is absolutely full of examples and suggestions of how to use rapport to achieve your goals, and, indirectly, help others to achieve theirs. The book ends by saying, “Rapport doesn’t just make your life better; it makes the world a better place to live.”

Another acronym I’ve come across for building rapport is TEA, which stands for trust, empathy, and active listening.

If you’re interested in building rapport on Zoom, some hints and tips include:

And being able to build rapport with people helps with other relationships and makes us happier people.

That’s got to be good!