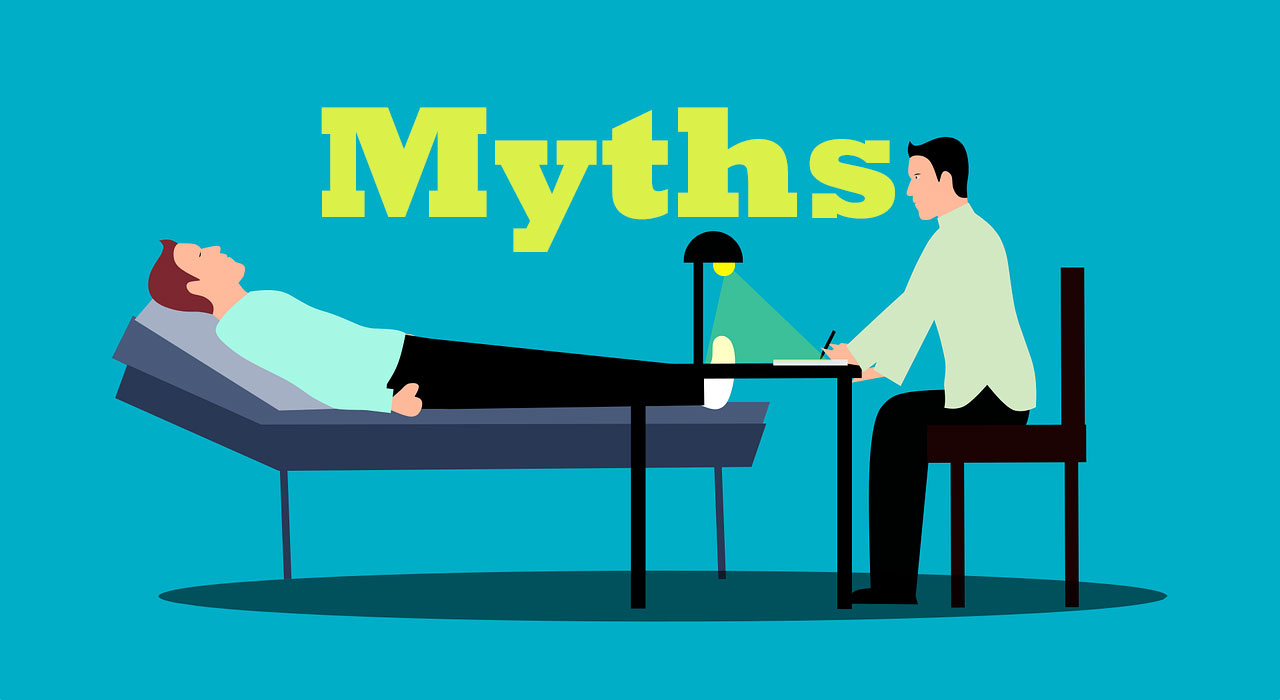 Part of my role as a hypnotherapist seems to be to talk to people about what hypnotherapy actually IS, and equally what it ISN’T!
So, in this blog, I thought it might be interesting to talk about some of the myths around hypnotherapy, and set a few of those straight!
Here’s ten of the most common things I hear…

1) Not everyone can be hypnotised.
This is a common misconception, I guess in part because it depends on what you understand as ‘being hypnotised’. It’s certainly true that not everyone can readily go into the instant hypnotic trance required by stage entertainers, not least because they probably don’t want to be up on stage!
I tend to use the word ‘trance’ instead of ‘hypnosis’ with clients, as I will do throughout this blog, partly because it separates my work from such entertainment, but also because trance is the recognised name for a distinct brain state where we are less responsive to outside stimuli, but yet not asleep. If I could use an EEG ‘brain scanner’ on my clients, we could see that their brainwaves while they are in trance are different to those found in both sleep and wakefulness. This is something we can all do – indeed it’s a state we go into most days, when we are focused on a particular thing to the exclusion of everything around us. For example, when we’re watching a gripping TV series, involved in a video game, engrossed in a good book, or driving and contemplating our dinner that evening.
Trance in my therapy room doesn’t need to be instant, or involve doing strange things – I don’t need to be entertained by my clients – they just need to be in the relaxed state of focused attention that we can all go into, and I use relaxing music and words to induce this natural state of focused attention with clients.

2) You can get stuck in a trance.
It might take my clients a while to open their eyes and come back to full awareness, but that’s because being in trance feels nice and relaxing!
You can’t get ‘stuck’ in trance any more than you can get locked into Call of Duty on the PlayStation – your attention will eventually become caught by something else.
So, another myth.

3) The therapist can make you do things against your will when you’re in a trance.
Again, no.
While it’s true that while in trance we are more open to suggestion, and can access our subconscious to get a fresh perspective on things that we may have struggled to think clearly about while our brains were awake, if I were to suggest something that clashed with your innate beliefs, preferences, or values, your brain will ignore it. Tales of assassins activated by a trigger word are not true, though they make for great plot lines!
By the way, this is also why me putting you in a trance and telling you to stop eating chocolate or pizza or crisps just won’t work, as your brain knows that actually, you DO want to eat chocolate… and pizza, and crisps. Because they’re tasty. So, that won’t work. Sorry.

4) Hypnotherapy can fix longstanding issues in just one session.
This is a tricky one (not least because I don’t consider my clients ‘broken’; so they don’t need ‘fixing’, but that’s a blog for another day…).
Some therapists do claim to ‘fix’ their clients’ problems in one session, but in my experience, those same problems will quickly recur.
Your brain is great at rewiring itself, and changing habits is entirely possible, or you would still be wearing nappies; but expecting it to unpick and delete a long-held habit in just one session isn’t viable. It needs time, and effort. Lots of time and effort, because to stop repeating one pattern of behaviour, your brain has to replace it with another behaviour.
Interestingly, giving up smoking can be achieved in one session if you are sufficiently motivated to do so, because instead of telling you to do something against your preference, my suggestions in trance help to reinforce your own decision, giving you a little nudge toward being smoke-free while your brain repeatedly changes that pattern of behaviour day by day.

5) Hypnotherapy is all about mind control.
This one is true.
But probably not in the way you’re thinking!
As I’ve said, I can’t make you do anything in trance that you wouldn’t choose to do, so it’s useless for me to try and ‘control’ you in trance.
But I can teach you to control your mind.
That’s the kind of mind control I do for my clients. I help them to understand how their brain works, in a simplified, accessible way and show them how to recognise when it’s going rogue, so that they can learn techniques to control it for themselves.

6) Hypnosis is the same thing as mindfulness
It's fair to say that both hypnosis and mindfulness are relaxing but they involve very different brain states.
Mindfulness aims for an impartial and passive observation of thoughts and emotions, allowing them to pass through our mind without us becoming invested or involved in them. Trance supports spontaneous problem solving and mental activity geared toward reassessing future events, a much more  active brain state.

7) Hypnotherapy is for people who have mental health problems.
Yes, this one is also true.
But, it’s not the whole story.
Hypnotherapy can be really effective in dealing with the most common mental health issues such as anxiety and depression, as well as supporting those with bipolar disorder to stay balanced and those with anorexia or OCD to control their more destructive habits.
But it can be really useful for issues like confidence and self-esteem and also for getting better at stuff you’re already good at – I work with clients to improve their performance in sports and singing, too, for example.
I can also use hypnotherapy to relieve phobias without making my clients confront the thing that terrifies them – I’ve helped clients fly to family weddings, walk in the park without being worried about dogs, get essential dental treatment, or enjoy a dream beach holiday without being afraid to swim.
How cool is that?

8) The ‘hypnosis’ part is when the problems get sorted.
This is one of the most common misconceptions. In fact, most of my session with the client involves talking, not just being under hypnosis. This is the ‘therapy’ part of our work, and includes discussing how the brain works, and building a vision of their preferred future that we will work towards. The ‘hypno’ element is only one part of this work, and is where the client is able to relax, allowing their subconscious to work on what we have discussed without the intrusion of our busy thinking brain!

9) The hypnotherapist has super skills that take ages to learn.
You may be disappointed to learn that I have no special skills, nor magical powers. Gently “putting someone in a trance” using imaginative language and relaxing music is not difficult to do – it was the first thing I learned on my training course with CPHT and how I do that, using what is close in tone to a bedtime story, hasn’t changed since I first learned it.

10) You need to talk about something to deal with it properly.
This one, for how I work in solution focused hypnotherapy, is false. Sounds counterintuitive, doesn’t it?
The thing that most often surprises people is how I don’t need them to talk about the problem that brought them to me.
After their initial consultation where I explain how I work, we will rarely revisit the problem – I trust your brain to work through it all in its own time, just as evolution has designed it to do, while we focus on making that brain work at its most efficient and powerful, as that same evolutionary process allows.