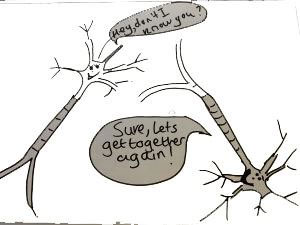 Written by Elizabeth Newton
As a Psychotherapist, one of the areas of brain science I get most excited about is that of Neuroplasticity. This daunting word is actually the concept of the brains' ability to change, and it is fantastically inspiring stuff! This organ has such a propensity for growth and survival, that even following significant brain trauma, where large areas of the brain have been severely damaged, it can regenerate itself to a point.

Until about 15 years ago, Scientists largely believed that the brain and personality was pretty much fixed and stable, and Personality Theory was, in my opinion, overly emphasised in Psychology Degree courses, categorising and labelling ‘personality types’. But relatively recent advances in Neuroscience have shown that the brain is adaptable, like plasticine, and it can change throughout our life.

An everyday example of Neuroplasticity is learning a new skill. Remember that first driving lesson? Certainly, for me there was almost too much to take in, the clutch, the steering wheel, changing gear, let alone navigating busy London roads. In that first lesson, I remember thinking it impossible I’d ever be able to do all of it at once. Yet here I am, many years later, tootling the kids around in the middle of rush hour, debating with both of them about whether the song on the radio is ‘cool’ or not whilst simultaneously thinking about what we’re having for dinner, whether my youngest has brought home their reading book, and keeping an eye on the cyclist 200 meters ahead. I am NOT thinking about what my feet and my hands are doing. That’s automatic now. I have wired in pathways in my brain related to that skill which is ‘driving’. But it took practice, repetition and time to establish those pathways. It also helped that I wanted to learn in the first place.

It’s the same with most of the ways we think and many of our behaviours and decisions. The more we do a specific ‘something’, we create a pathway for that ‘something’ in the brain. Whether it be snacking when we feel stressed and worried, biting our nails when we’re concentrating on a task, or perhaps thinking about what we feel confident and willing to do. As the chemicals in our brain travel down a familiar route, they flow across the same synaptic gaps in between brain cells as they did last time and the gates at the end of the brain cell open more readily in response to those chemicals. Quite literally, a structural path is formed which gets stronger and more resilient the more we repeat it. So much so, that its’ difficult, inconceivable even, to act or think in a different way. Essentially the brain repeats what is familiar and follows the path of least resistance and, tah dah, a habit is formed. Imagine pouring water down a brick wall. The water flows down grooves in the brickwork it has carved out over many rainy days.

The good news is that we really can make Neuroplasticity work in our favour to achieve something new. Even if this something new is to go to the gym more often, make a cup of tea rather than open a bottle of wine, or simply be kinder to ourselves or others. The second piece of good news is it’s never too late to do so. Whilst children and teens have an enviously plastic brain, we can still influence the connectivity of our grey matter well into late adulthood. In fact, my oldest client in her early nineties surprised herself by discovering she’s a great watercolour artist! Not only that, but she CAN be assertive and self-confident, much to the amusement and support of her family and friends.

This, self-directed Neuroplasticity is why people chose my approach as a Solution Focused Hypnotherapist. We use our sessions to create the optimal environment for breaking down old unhelpful pathways and building new, albeit fledgling, helpful ones. Indeed, we can even generate new brain cells if clients are up for the challenge! With intent, repetition, practice, and time for nature to do its physiological thing, it really is possible to rewire your brain!